So I’m sure a lot of you guys are just like me and don’t have the budget just yet to invest into certain kinds of gear to achieve the shots you want or if you do how many times are you actually going to use that piece of gear once you get it?
So something I like to do is to get creative when I shoot at home and just use the things that I have around me already. With a little imagination you can create a product commercial that looks like this.
So when I started laying out this idea in my head I quite didn’t know how I was going to make the box slide in or have the bottles and ingredients spin.
I don’t own a motorized lazy susan or own any fancy sliders or anything.
But I was able to do these things just by gathering a few things I already had laying around my house.

So this video was shot for The Bruery they’re located out of Placentia, CA.
The box in the video is part of their Preservation Society where members receive quarterly boxes to their doorstep  and I wanted this video to show how much fun it would be to receive one of these boxes and what beers they would be getting inside.

So in the first scene of this video I wanted to have the box slide into the frame and land perfectly center in front of the door.  The way I was able to do this was with some duct tape and my door mat.
All I did was stretched out a couple of feet of the duct tape and attached the end of it to the bottom of the doormat which will help the box slide smoother on the ground as I pull the box out of frame, which later in premiere pro I would play in reverse. Luckily my front porch has stairs which allowed me to shoot at a lower angle which helped me hide the doormat and duct tape.

And before I slid the box out of frame, I tilted the box a few times so that I had some clips to work with to make the box slide in and tilt slightly as it came to a stop.
I felt like this would make the whole scene feel more natural rather than just having the box slide in flat the entire time.

Then the clip of the box knocking on the door was actually one of the easiest shots to get
All I did was position the box slightly closer to the door and then just used my hands to tilt the box forward a few times making sure to keep my hands as low as possible to keep them out of frame.

From there I wanted to get the perspective of the person who was actually receiving the box. So all I did was opened the door and filmed myself grabbing the box a few times trying to make sure to end by filling the frame with my hand.
My plan was to somehow transition going inside the box and to show all the beers and ingredients, however I wasn’t really sure how to do this, but I finally came up with an idea and I feel pretty happy with how it turned out.

I decided to shoot the remainder of the shots in my home studio, which is actually just my garage. I just recently purchased two GVM P80s and this was kind of my first real project with them and will say that I was pretty impressed with how they performed!
I setup one of them to use as a white backdrop then used the second one as my main light followed by a white foam board which helped add in some fill light on the opposite side.

To help transition in from my last shot of me grabbing the box I wanted to now make it appear as we went through the top and into the box. So I took a box and set it up with the light shining directly through it and just quickly filmed a few pans going inside the box straight into the white background That helped me transition into my next shot which was the ingredients falling and the bottles spinning. 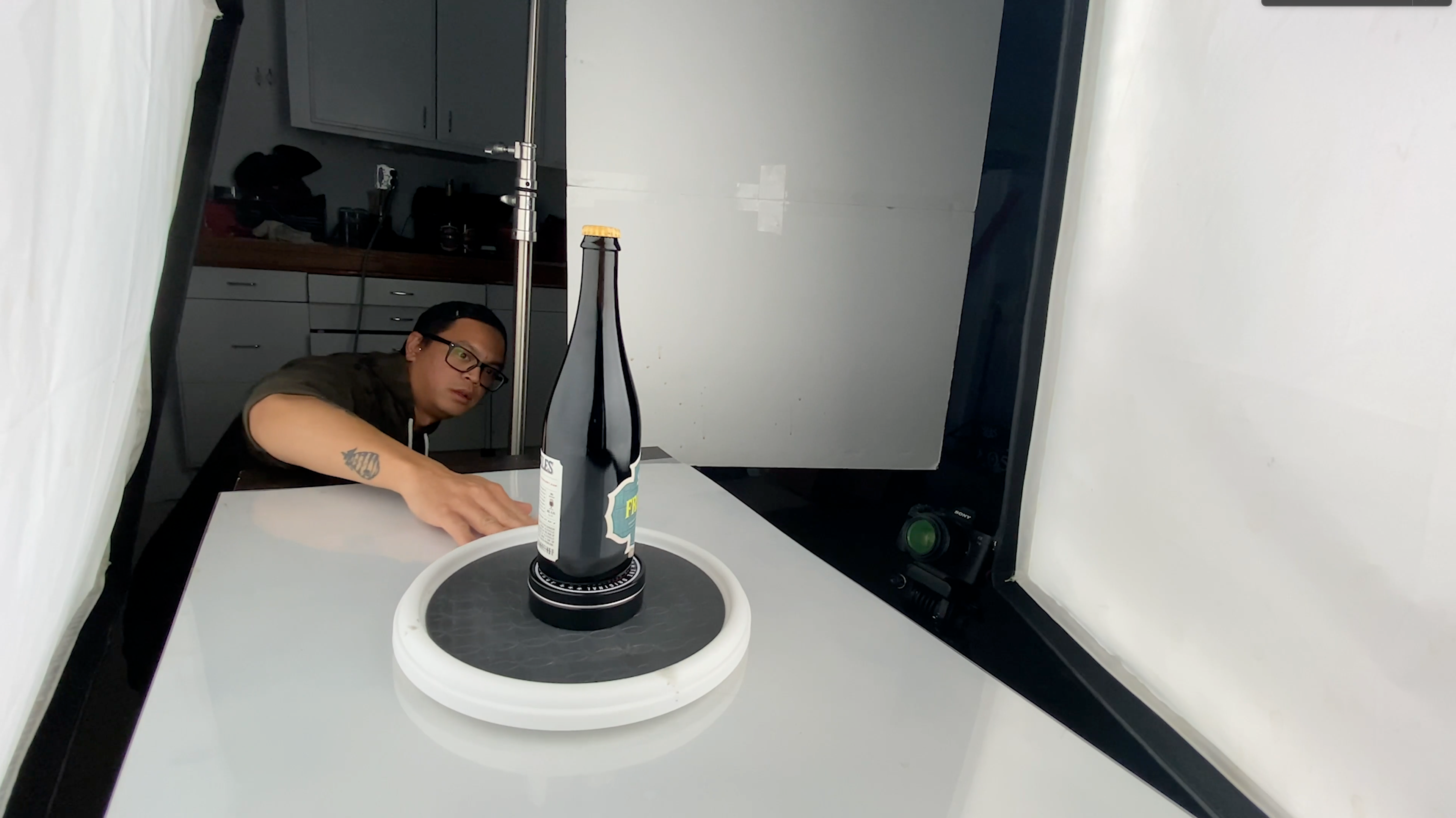 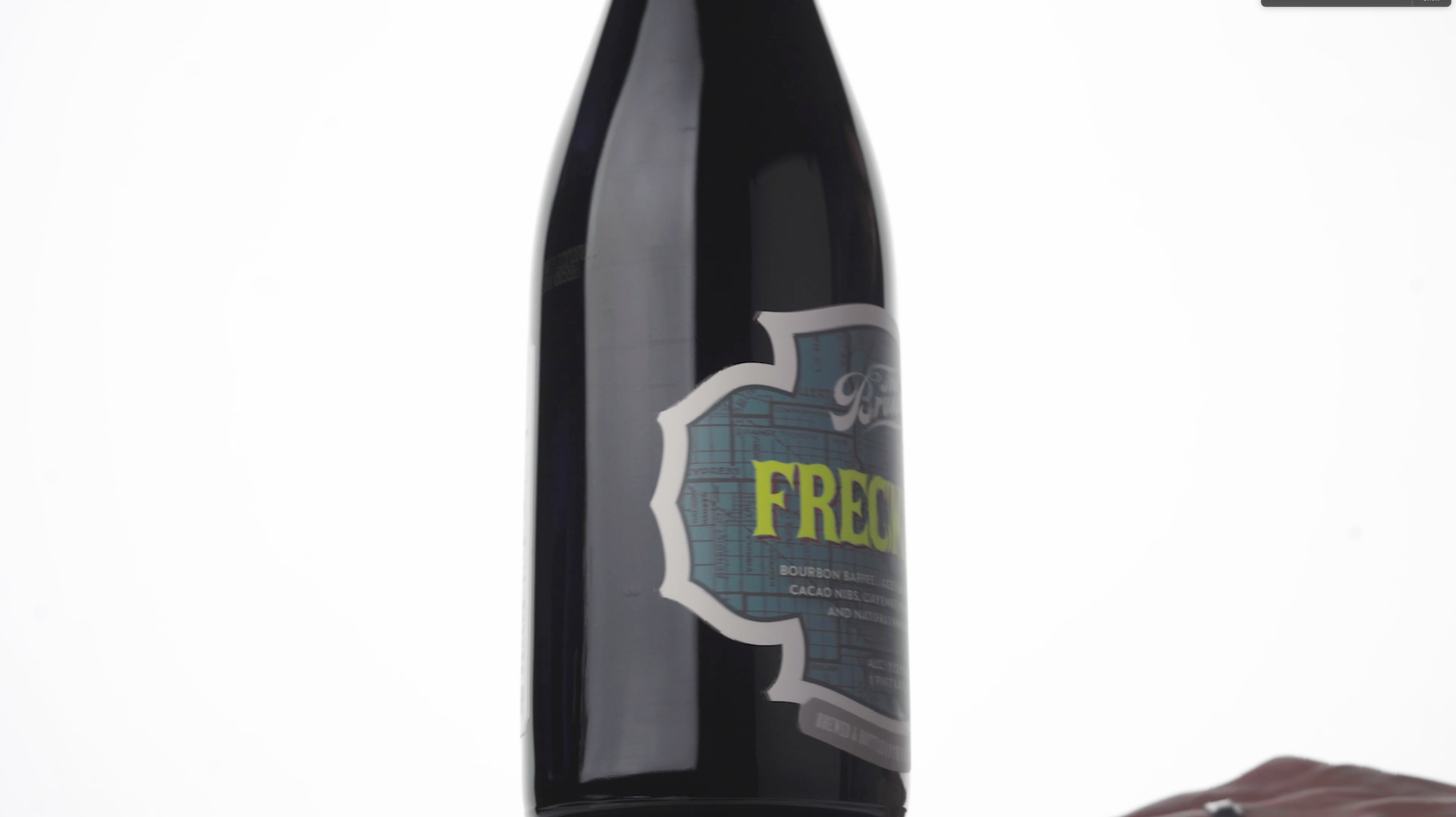 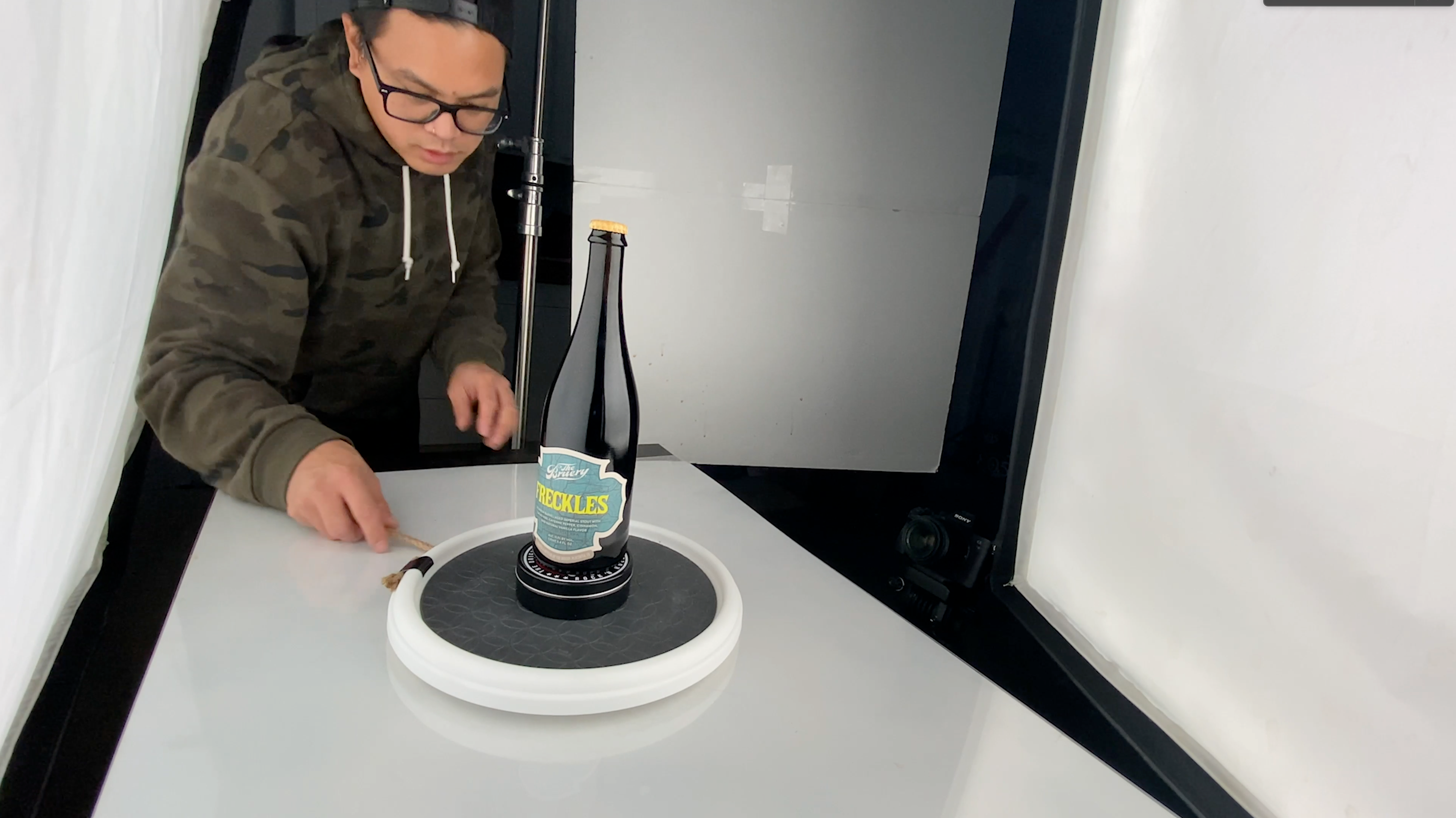 This is actually the part I had the most difficulty with. I was using a lazy susan to spin the bottle and the results I was getting were just very inconsistent. And if you guys don’t know what a lazy susan is they’re about $10 and you can get them from Walmart or Amazon and most people have them in their pantries for food or their spices, but a lot of people have started using them for product work.
Spinning by Hand
I wanted to make sure to keep the spin of the bottle at the same speed between each bottle, but when I was spinning it with my hand it wasn’t very consistent and every now and then you’d see my arm or hand in the shot.
Spinning with Rope
Then the next thing I tried was attaching a rope and pulling on it, but it was pretty inconsistent and the rope kept getting stuck underneath the lazy susan.

So after some trial and error I actually remembered back to one of my favorite filmmakers and youtubers Austen Pauls who gets really creative with his shoots, where he uses a drill to spin some of his products.

DIY Motorized Lazy Susan
So I ended up actually drilling a hole directly through my table then hot gluing a wooden stick to the bottom of my lazy susan so I could use my drill to spin the lazy susan at the same speed each time.
*DISCLAIMER: I definitely don’t recommend drilling a hole into your table unless it has no value to you. The table I shoot on is pretty beat up from placing various different kind of backdrops onto it and I only ever shoot on it with these backdrops so I’ll literally never see it.

So the one issue I did run into while filming this with the drill attached to the lazy susan was the drill would spin a little too fast even at it’s lowest setting. I wanted to shoot this at 4K 24fps, but the label wasn’t legible at the speed it was spinning at. So I ended up switching to 1080p at 120fps and just slowing it down in premiere pro to about 35%.

From here I pretty much just kept using Austens technique by putting each ingredient onto the drill spinning them 2-3 times around then in premiere pro I created a mask to hide the drill bit then used some simple position & rotation key framing to make the ingredients fly through the frame and around the bottles .

And then everytime I wanted to transition into a new beer I just made sure to have one of the ingredients cut through filling the whole frame so I could mask out the bottle before to introduce the new beer.

And as a finishing touch to my video I wanted to have it loop back to the beginning. So I decided to film the box, but the opposite way that we did in the intro so that the box could slide into frame then back out which loops back to the box sliding onto the porch.

I hope you guys enjoyed my first product commercial breakdown. I can’t thank you guys enough for the support you’ve given me so far on this channel! I’ve already had two people tag me in photos that they’ve shot using some of my techniques and I would absolutely love to see more!
So please feel free to tag me or send me a message on instagram! Both of my accounts are linked below! And make sure you like this video if you enjoyed it or found it helpful! I have a lot more instore for you guys so please make sure you hit that subscribe button! I’ll see you guys in the next one!
Follow These Awesome Photographers:
@coldonejoe
@jasonjourney.mn
@chuchogallego
↑Back to Top